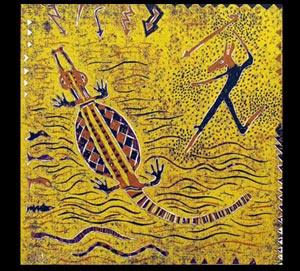 Ignorant of the magical destiny of man and the animals, the hunt goes on … We still don’t understand the role of the animals in the harmony of the cosmos, the symbol of each animal, the metaphor of the tiger and its dexterity. That birds always fly, the crocodile waits patiently in the water, the entire order of nature which is but an undiscovered memory. To speak of wildlife nowadays is almost like speaking of unicorns and dragons, but their mere mention saves us from total annihilation. Thinking about them is a positive symptom of another vision regarding the position they take as part of the mystery of creation. “The hunt” is a series of linocuts made between 1995 and 1998. Image size: 30 cm x 30 cm, edition: 5 or 7